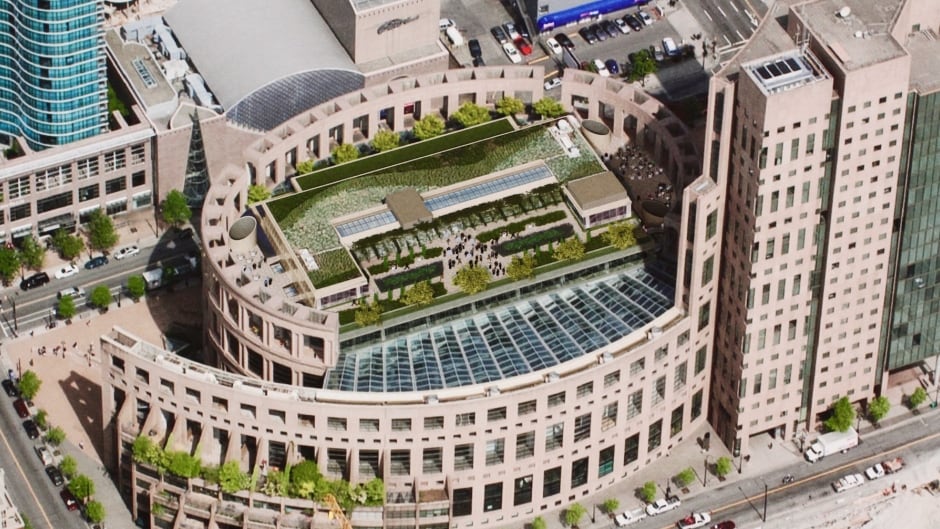 After today’s grand opening of the rooftop garden on the Central Branch of Vancouver Public Library I finally got the chance to ask a question that had puzzled me for 23 years.

I was about to walk out when I saw that the person leaving just ahead of me was Moshe Safdie, the very man whose name had crowded my brain at countless uncomfortable moments in the building ever since it opened in 1995.

Vancouver’s Central Library is one of the crowning achievements of Safdie’s career. The “starchitect” is known for modernist spectacles the world over, including Habitat 67 in Montreal. Opinions were divided in Vancouver when his library opened. Some admired the bold circular shape, others called it a wanna-be Coliseum and wondered what that said about the city. I recall a design professor railing about how the outside public spaces have proved to be anything but.

I’ve thought of that attack when hunkering down through the barren north entrance to get to the front door, but I knew it was countered by the southern entrance amphitheatre steps. They make a pleasant if concrete seat on a sunny day for anyone who wants to soak up some warmth tinged with nicotine from the besieged smokers lurking against stately columns nearby.

I still admire what Safdie did with the visual display. I think it has held up. It still works as respite from the gaudy green glass towers sprouting up like corporate fungi all over the city. But there was something about the library I’ve never been able to understand, until today.

“Moshe Safdie!” I called in bright voice to stop him from passing through the book detector electronic gates and out. He turned.

“Just wanted to say thanks for all your work here,” I said, offering a palm. That was more slathering than I would use as a journalist, but I was talking as a civilian and anyway it never hurts to soften up an interviewee. As we shook hands I added, “I also wanted to ask you a question.”

He nodded with a neutral expression.

“I hope you don’t take this the wrong way,” I added. His face didn’t change.

“I don’t know how many times I’ve been in this library when I have to go — I mean use the facilities — and I’ve found myself on one side of the building walking aaaall the way across the floor.” I pointed to an unseen wall in the distance beyond stacks of books.

“You mean to there,” he said, gesturing to the opposite wall with a single men’s toilet.

“Right. And when I get there, at last, it’s occupied. Naturally. For a space this big. So I make the trek up to the next floor. But that one’s filled too. So I try another floor, and on it goes. And every time this happens, I say the same thing: ‘Moshe Safdie.’ I also say to myself, ‘If I ever got the chance, I would ask him: what were you thinking?‘”

He nodded. Got the point, wasn’t upset, knew exactly what I was talking about.

My eyebrows went up. He sighed a little.

“It was the way we were told to do it,” he explained. “Toilets in public places have been an issue for a long time.”

“True,” I offered. “The new one in the park near me was a beautiful thing, might have cost a million. They shut it down for a while this summer and put in a Portapotty because people were using it hang out and party.”

He sighed again, and we talked more about the “big necessity.” He said he’s had to fight for more public facilities in some of this buildings. I got the impression he didn’t always win.

So what to do? He mentioned attendants and how he’d seen it work in places like Singapore. I thought of developing countries where I’ve seen the same, and wondered if it might work here as part of a strategy tackling homelessness or unemployment.

Solutions that would have to wait for another day. He passed through the gates, no stolen-book beeps, and out through the curving atrium crowds.

I’m a writer, designer and community ecologist based in Vancouver, Canada. I help people reconnect with nature.